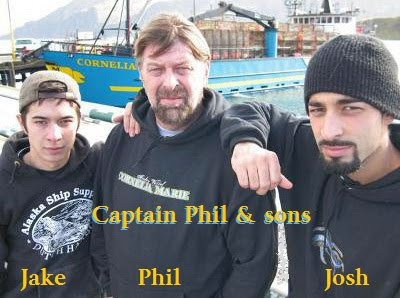 One of our favorite shows is Deadliest Catch. Even tho' the boat life that we see on this program is entirely different than Cappy's, still, he feels a kinship toward the men on these ships. They spend a lot of time away from home and their families, and it's not inconceivable that often,their lives might be in danger.
Watching the Deadliest Catch, we found ourselves liking, among others, the boat captain on the Cornelia Marie, Captain Phil Harris. He had his two sons, Josh and Jake on the crab-fishing boat with him, and thus, we got to see some fascinating relationship interplay with this group of men. It broke our hearts when last February, Captain Phil passed away.
Much to our shock and delight, we learned from the Deadliest Catch Forum, that Phil's Jazz funeral would be held in New Orleans! How could we not go, since Cappy was off the boat. We got up early on Wednesday, June 9, and headed for the French Quarter. It was beautiful, but typically HOT and sweaty. We walked along Frenchman Street til' we got to Phil's old hangout, the Blue Nile, where there was a lot of camera equipment set up, camera people, and throngs of fans like us. Then among the crowd, we began to spot members of the show's boat crew members wandering around visiting with folks. I was busy taking photos and videos...I kept being jostled, so forgive the shaky video that follows.
One of the members of the crew on the Northwestern, Edgar, walked up to Cappy and struck up a conversation. What a nice guy he is! We were strolling down the street with him toward where the parade/funeral procession would begin, so I asked him how it felt when they are out in the wide open ocean working hard, in solitude, then to come here to all this attention. He said, "Naw, we know we are great", to which we all laughed, then he continued, "No really, whenever we go back into port, everybody gathers all around us like this, so we know we must be kinda special"....but you know, he wasn't saying that in a boastful way, but almost humbled. He also said that no matter where they go, the conversation always ends up being about crabs, at which point one of the movie directors told him that he needed to get back to his group. At another point, he came back and had a nice visit with Cappy, who told him that if it wasn't for Coast Guard regulations,...the fact that he (Cappy) was shipping out the next day and could be tested for alcohol consumption, that he'd stay and have a beer with him. To which Edgar responded, "DANG!" or a sailor word to that equivilent. 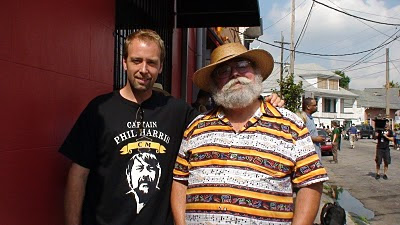 Oh, I tell ya, after the parade, Cappy was SORE tempted to go into the Blue Nile, where the boat crews were gathering, but he thought he'd better not. So, we came home, loaded with photos, videos and a better feeling, knowing that Ol' Phil had a wonderful send off. The rather lengthy video is over on youtube, fraught with flaws, and maybe a bit too long, but if you watch the whole thing, you may feel as though you were a part of Phil's Jazz Celebration, too. (There were a lot of professional people there and one of them quickly interviewed Cappy, so you might see him on the show...if not the little interview, then most likely in the crowd.) ...And now that we've met these men in the flesh, we are going to be worrying and praying a LOT for these guys out on the DEADLIEST Catch.
Try this link and you'll see the video of Phil's Jazz Funeral at the top of the list of all our other videos. http://www.youtube.com/user/cappyandpegody#g/u
Posted by cappy at 6/22/2010 1 comment:

Peg and I loaded up da SUV and headed to town to "make groceries". We made the trip to Thibodaux, La. and went to our favorite grocer, Rouse's. Rouse's grocery store is a upscale kinda place with a great wine and beer selection, fresh local meat and seafood, and some friendly helpful staff. With very few exceptions they are generally smilin', and act like they happy to see us. While there, I called my good friend Sam and asked him if he wanted us to pick him up some pork spare ribs which were on sale this weekend. Those of yall who know us, know how much we love BBQin' and we don't call Sam "Smokin' Sam" for nothin'. 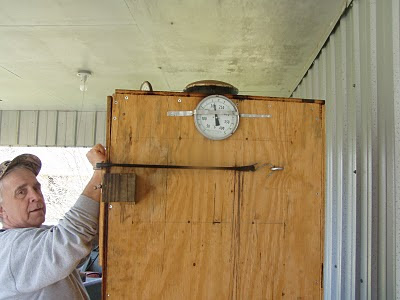 The man has a smoke house in his shed and is the "go to" guy for smokey treats in town. We already had planned to pick up a couple big hens for him to smoke for us the next time he fired up his smoke box. When we got to Sam and Louise's house, Sam was just taking a pack of pork chops out of the smokehouse and we brought over some homemade pickles and, well...thas da way it is in the country. Exchanges were made and we left there with 6 smoked pork chops, 3 of which didn't make it home. The other three made a most excellent addition to a black eye pea dish, cooked in a black iron pot. Peg says these are the best pork chops ever. I say hers are. I wonder where dat leaves my batter fried Southern pork chops? She also says they are the best ever, too. I don't know if I'm playin' second fiddle to Sam's pork chops or not...I guess it's ok, tho'; they are very good. 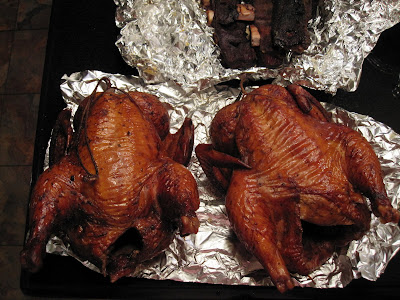 This afternoon several big thunderstorms moved through the area, but between showers we fired up the Jeep and dashed back across town, over to Sam's and picked up the 2 hens Sam had smoked for us. He even threw in a bunch of his smoked ribs wrapped in tin foil for 'langiappe'. The other day while we were still sound asleep, we woke up and found a pail of cucumbers outside our back door that somehow had made it across town from Sam's garden. If I know my sweet Pegody the two hens will be starring in a gumbo pretty soon. Ican't hardly wait 'til next hitch and the "gumbo-ee" and "pickley" adventures she has planned for us.
Posted by cappy at 6/06/2010 No comments:

Last hitch I came across this Osprey Eagle nest in the Atchafalaya River Swamp. The pair of eagles perched way in the top of a lightnin'-struck cypress tree were 'changing watch'; 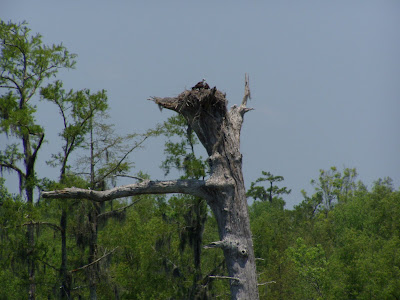 (as always, click on the pictures to get a bigger, better view) 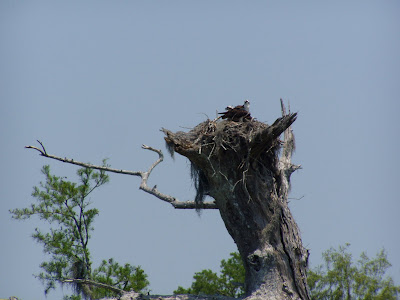 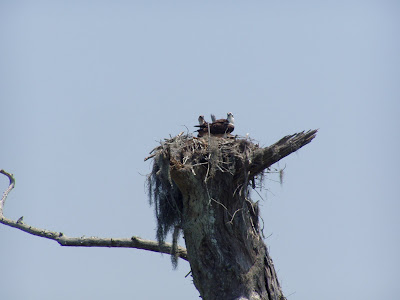 when one flew up, they visited for awhile then the other one flew off. 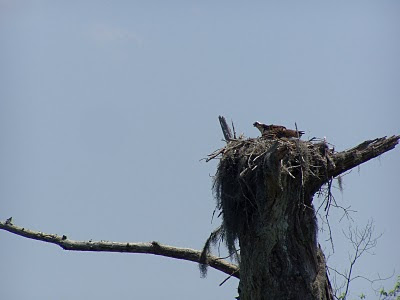 Kinda makes me think they were sitting on some eggs. If I pass that way again, I'll check on them and let yall know. There was a bigger bald eagle nest further down, but nobody was home. I sure hope they are ok, cause usually they use the same nest over and over. The Eagle population in the swamp seems alive and well. I saw several that day, so hopefully the empty nest was just temporarily vacant.
Posted by cappy at 6/04/2010 No comments:

The One That Thankfully Got Away

Our tankerman/deckhand let fly with a long cast, with crab for bait, trying to invite a big redfish to our gally supper table. Out of nowhere came a seagull swooping down pouncing on the bait. 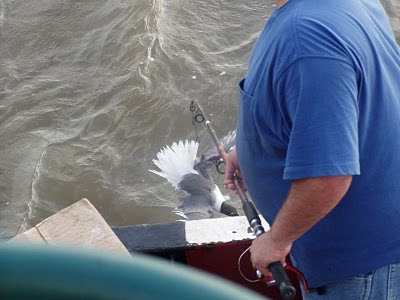 There arose such a ruckus that Darby, the Mate, ran out of the gally to lend a hand. He is the guy in the picture. I grabbed my camera, ran to the back of the top deck and snapped these 2 pictures. 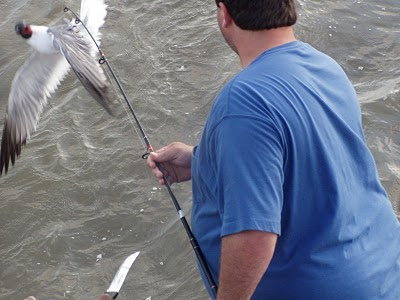 It was a flapping, squawking, hollering mess there for awhile, but we got him cut loose. The hook hadn't got him; he was just tangled in the line.
The gull floated there for a minute collecting it's birdy wits, I guess, then flew away with no difficulty. Soon as he got air-born, he was joined by several other gulls squawking loudly as they all flew away. Ya gotta wonder: Were they congratulating him on his escape, checking to make sure he was alright, or griping him out for being stupid enough to try to eat bait, or wondering in amazement how in da hell did he get away from hungry Cajuns who had a Ginsu knife.
Posted by cappy at 6/04/2010 No comments:

Lots of folks been askin' me 'bout da oil spill. Well, believe me, I could say plenty, and I may someday. It is just too painful to talk about now and, shucks, I aint no white-coated engineer anyways. I'm just a third generation "oil field trash". I got my opinions, sure, but they won't solve anything, so I'll just leave it 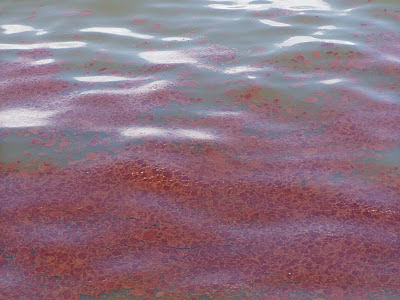 
I hope and pray that this picture don't put an end to the next two. 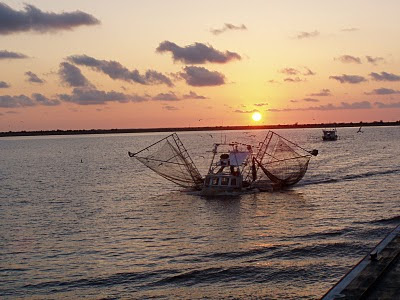 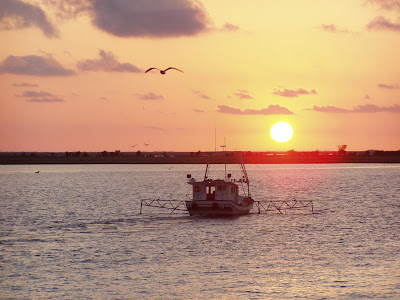