To some folks it's "sticky chicken", some call it "grease gravy" and others call it "smothered chicken".  It's a dish I remember from my youth that I go for years between cooking, but I really enjoy it when I do. The topic came up on our local Facebook group and once I heard about it, the ol' "envie" got ahold of me. (envie pronounced through the nose "au-VEE". It means a CRAVING.) Since it was rainy, I thought that seemed like a good time to indulge in this old dish. (actually, even if it hadda been sunny and hot, instead of rainy and hot...I'da done the same.)
I called the local grocery to make sure they were not flooded, grabbed my "shramp" boots (what we Cajuns call shrimp boots...what the shrimper fishermen wear...and regular Cajuns, too.) and jumped in Tinker Bail (my Jeep) and drove to da "Pig". (Piggly Wiggly...gosh, I've gotta explain everything to some of yall, don't I?)
When I got home from making the groceries (buying the groceries) and "saved" 'em. (put 'em away...come ON...I gotta tole ya everything??)
I seasoned up a family pack of chicken thighs in our own Cajun spice blend and put 'em in a black iron pot. No water no oil...no nothin', jes' chicken. 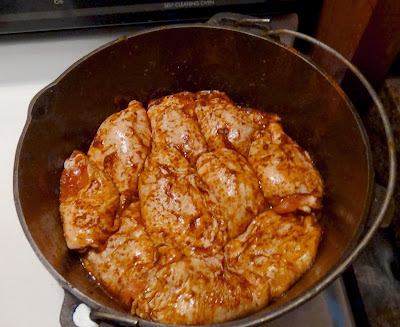 I put the lid on and let it go over medium heat while I whacked up a 3 lb. sack of onions. 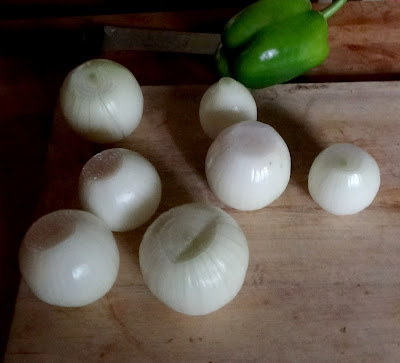 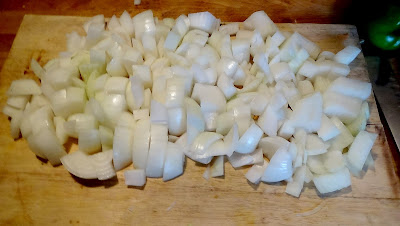 The chicken pieces were fat and juicy so they made their own gravy. I cooked 'em for 15 minutes, then flipped 'em over to let 'em brown on the other side. 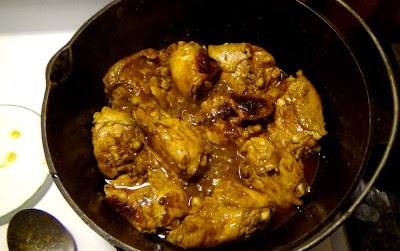 Once the chicken was cooked, I took it out of the pot...just the chicken and left the drippin's still in the pot. Store bought fryers are so tender that I have to remove them while I build the gravy or they'll fall apart. I dumped in the onions and seasoned them lightly with some more of our own spice. The salt in our spice blend helps break down the onions faster; pulls the moisture out of 'em, and such. (We're all on the same page now, right? I gotta watch some of these Yankees, callin' gravy, "sauce"...stuff like that.) 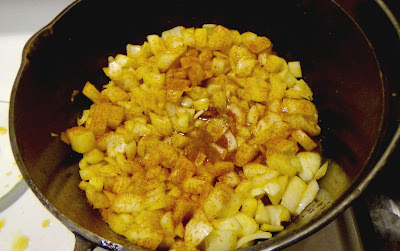 While the onions cooked, I cut up a big bell pepper and some garlic from our yard. 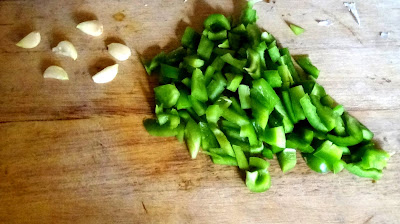 Once the onions cooked down, 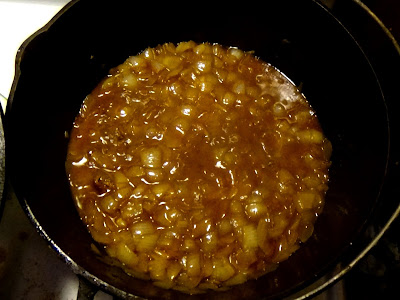 I added the chicken back to it, and the bell pepper and garlic, then turned it down to simmer for a half hour or so. 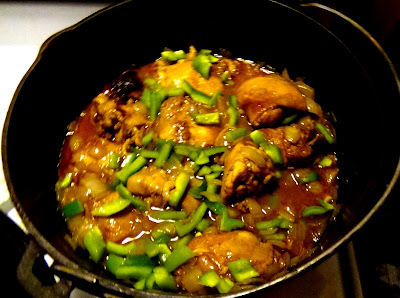 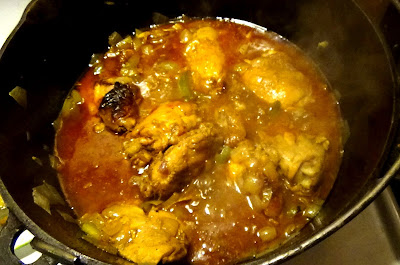 Once cooked (and no grease drained off, but a nice juicy, tasty gravy) and served with a side of veggies and some of Peg's homemade bread and butter pickles, I don't care what ya call this chicken dish, it became old-fashioned Cajun comfort food at its finest. 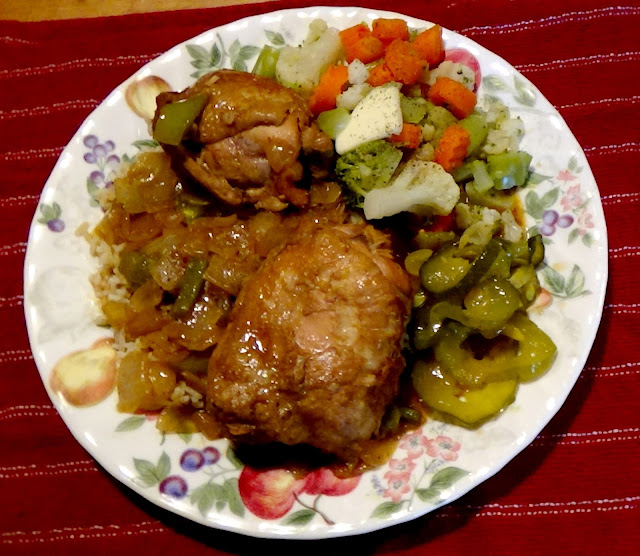 These days we try to eat healthy and remove as much fat as possible from our diet, but once in a great while we indulge in this heart warming meal (Cappy's guilty pleasure, ya got that? :-)
Posted by cappy at 8/18/2016 No comments:

What I Planted in the HEAT of Summer 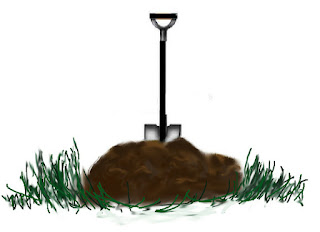 This July went down as the hottest on record here in South Louisiana. Combine that with above average rainfall and you end up with unbearable humidity that makes you want to hibernate all Summer inside the house with the A/C cranked enough to make ya shivver. Even our heat resistant garden plants gave up, but wouldn't you just know it...the only thing out there that won't give up is the weeds. Oh sure...just like 'em, too...they use the time when we just can't bear to be outside to go and take over the yard!
It's about all I can do just to push mow the lawn...maybe not as frequently as the neighbors might appreciate, but I manage to get it done. Hot and miserable work where your sweat won't even evaporate off ya. I have to take plenty of breaks.
To tell the truth, we've even given up on our wooden garden boxes. We need to get more lumber and build a few new ones anyhow, because they are getting old and rotted, especially in this sweltering, wet weather. I'm beginning to know how they feel.
Witheringly oppressive steaming heat or not, I decided it was time to plant something I've been dreaming about for years, and it's something that has been needing to be planted for over 20 years. With that in mind, I went to Lowe's and brought home some lumber. Praying the thing I was planting would be a success,  I dug an oblong hole in the yard and placed a 4"x 4" post in the hole. I did this twice.

Once it was in place, I watered and fertilized with 80 lbs. of quick crete and mulched with our rich yard soil.
After a couple days the poles sprouted eye bolts! 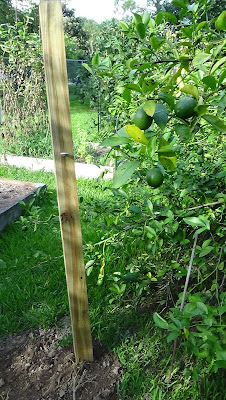 And the next day the S-hooks!?? 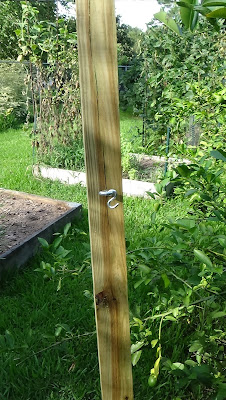 The S-hooks put forth chains... 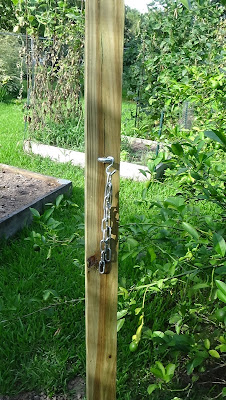 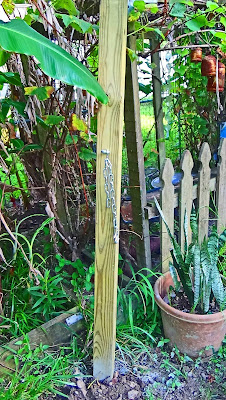 Then a monumental thing happened that has taken over 20 years in the making... 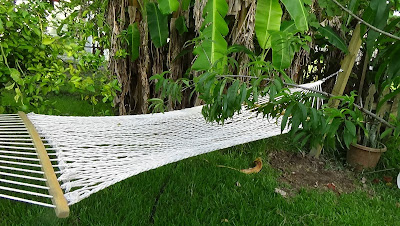 My Father's old hammock got strung up between the two posts I had planted! My Dad had this ol' hammock that swung  'tween two trees at his favorite state park for a month at a time. It's a well-traveled ol' thing. When he died, I got it but didn't have the heart to hang it. It was sometimes forgotten, but still, often thought of as it spent time under my bed, or in the shed and later up in the attic.
Finally, a couple of weeks ago I got it out, cleaned it up and stretched it out. Sadly, it didn't hold up. I tested it out and fell through the webbing. I was spilt unceremoniously onto to the grass. The poor old thing was just too old to hold chubby old me. I actually shed a few tears as I cut the old cords from the spreader bars. I decided to whack up these wooden spreader bars and set them beside my brick fire pit. This Fall, when it's cool enough to sit outside again, we will light the pit send 'em off in style, lifting a few cold ones to my Dad and his old hammock that he loved so much.
So meanwhile, here we were with two perfectly good posts 'growing' in the ground and no hammock. Peggy went online and found a new one exactly like Dad's. I kept waiting for the FedUps truck every day and when it finally got here, I ripped the box off and headed out to the yard to try it out.
Being it's brand new, when I got onto it, it immediately stretched way down 'til  my butt was on the ground. I tole Peggy to stop laughing. She said she wasn't, but I could hear her over there. She had the camera and asked if she could video me. I said, "NO!"
I tried crawling up out of the thing...and there she was taking a video anyhow!!  I dragged my body out onto the grass and tried standing up and  told Peg explicitly...I said, "I forbid...FORBID you to post this video...stop laughing! It's for your eyes only, ya hear?!" (I thank God she can't find that video now; she musta taken pity on me and deleted it.)
So then, once I got upright again, I tightened the thing several times until I finally got it tight enough to try laying in it again...
it was Heaven...at long last, a hammock just like Daddy's. As I lay there thinking I was 'the King of the yard!' I noticed something that made me mad: one of those posts I planted was beginning to lean in; bowing in, even after the concrete had set days and days ago, and now my butt was flirting with the grass again!  Grrrrrrrrr!!
I dug an even bigger hole, added 100 more lbs. of quick crete and dared it to move again. I threatened it with "dead men marsh anchors", "stiff legs" and a number of other ways us crafty Cajuns have to deal with our soggy ground.
Well, after a month of trying one thing and another, I have something I have often dreamed about which I have GROAN to love. I planted myself in my hammock in my yard and have a loving wife to enjoy it with me. I hope Daddy looks down with a smile when he sees us keeping a family tradition. If he's indeed watching, I'm sure he enjoyed watching his son's trials and errors of trying to fill his hammock. 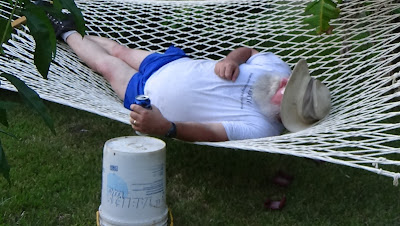 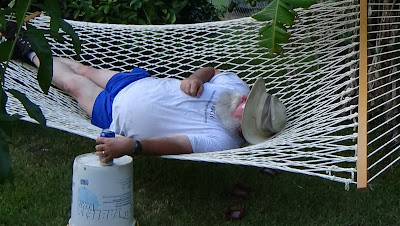 That's the only thing I could plant in this record heat. Hopefully, it will give us joy for years. Nestled in our "courtyard-in-progress", shaded by the bananas palms and citrus trees, it's a great place for relaxing...or will be. I started to say it's a great place to chill, but that's still months away.
Psst...Peggy here. Too bad he made me get rid of the other video of him climbing out of it. At least we have this one. Sorry, Cappy, I just couldn't resist.
Posted by cappy at 8/07/2016 No comments: