A Chocolatey Blast From The Past

Only a kid from South Louisiana could understand my Joy to discover that this old childhood favorite had returned to it's original recipe. The Elmer's candy company, like everyone else from around here, had suffered from the hurricanes. In the process of "coming back", for some reason, they changed their recipe of this glorious little Easter candy. It broke my heart. It just wasn't the same; it tasted of wax, and was not as creamy and flavorful. Not the way I remembered it at all! Peggy and I went to the store last night and they had a box of individual Elmer's candy on display; kinda early for Easter, and even tho' Peggy was dubious, I went ahead and got a few of them. She reminded me how broken-hearted I had been last year and said because of that "waxy thing" they had become, I'd probably be disappointed again this year. I just couldn't wait to get home to try one, so even before Peggy had the SUV started, I opened one. As soon as I opened the wrapper, the wonderful familiar smell of the old days immediately wafted though the vehicle. As I bit into it, the beloved chocolate candy of my youth flooded my mouth. Da Real Deal had returned! If you folks from other parts of the country are not familiar with the Elmer's Candy company, I strongly recommend ya give 'em a try. Here is the link to my childhood, all time favorite chocolate company. Leave us a comment and let us know what ya think. For the first time in years, I'm looking forwards to the Easter Bunny again:-)

www.elmercandyjrchocolatier.com
Posted by cappy at 1/30/2010 3 comments: 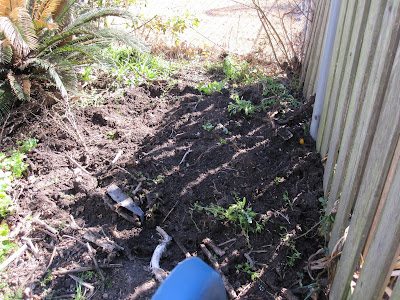 May they compost in peace. I paused in silent prayer asking for better luck this year. 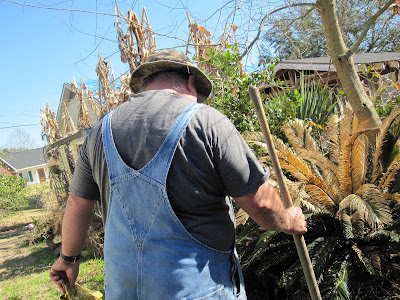 As I dumped the lemons into the compost heap I can't help but wish things had been different. Last hitch I got home a couple weeks before Christmas and one of the first things I noticed when we pulled in the driveway was the "lemon monster". Thats how we lovingly refer to our Meyers lemon tree. The tree is short and very wide. It's branches hang to the ground and it is tilted at a rackish angle from hurricanes gone past, and loaded with big juicy lemons. This tree makes lemons almost year around and in the winter when the bumper crop comes in we pick a wheelbarrow full of these wonderful lemons. Peg and I excitedly discussed plans for lemon jelly, Pepper jelly, honey lemon jelly, lemon curd, etc. but realized it would have to wait until next time I was off the boat. After all, this was our Christmas filled with the hustle and bustle of the Season. The UPS guy like to wore the drive way out, with daily loads of presents; some for us and some mail order for our family and friends. We were way too busy packing and wrapping and mailing, etc. for jelly making, so we decided to let the lemons hang on the tree 'til I would get home next hitch to harvest and preserve. We have waited as late as February in the past to harvest them. We had no way of knowing we were in for a record breaking cold front (Global warming my A**!!!). The lemons froze and the tree was seriously damaged. When I got home the mushy rotting lemons were only fit for composting, so Peg and I buried about half of them in the compost heap and left the rest under the tree to compost there. 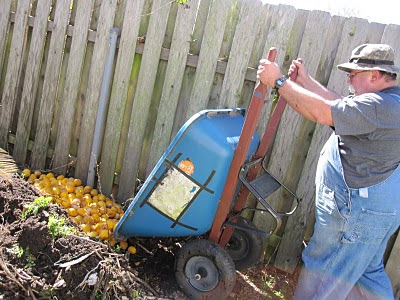 Here in da background ya can see all that's left of our glorious 'lemon monster'. All we can do is fertilize and wait and pray it will recover. 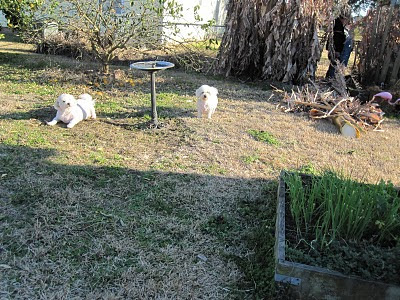 Ya see the problem with a semi-tropical climate is the semi part. That tree was 9 years old and had never froze. It had gotten way too big for Peggy to throw towels over it, in case of a freeze, as she showed in an earlier post. I guess this is why the ole timers say citrus trees will break your heart. On a good note though, the Grapefruit, being bigger than the lemons, didn't freeze and are sweet and delicious as always. Hmmmm wonder what we can turn them into? :-)
Posted by cappy at 1/29/2010 No comments: 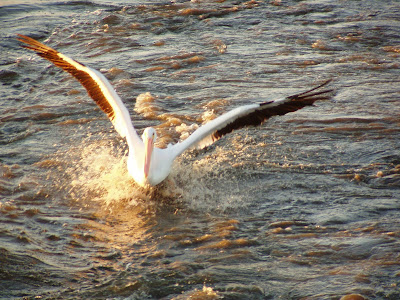 While at work I took a bunch of pictures of white pelicans and seagulls following us in our wheelwash. Please forgive me, too lazy to make a slideshow, I just dumped the pictures onto Photobucket, and if you love wildlife like I do, please click the title of this post and enjoy the show.
Posted by cappy at 1/28/2010 No comments: 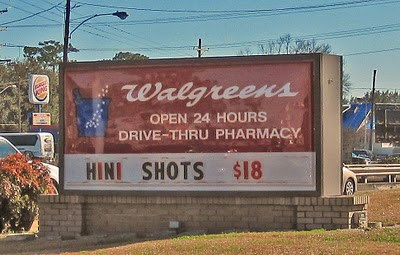 How do you read the bottom line of this sign? I guess I was tired or something, because the first thing I thought the sign said was...or sounded like was "heinie or hiney" shots. It took me a minute to figure out what it was really about, but I couldn't leave it at that, so we drove around the block so we could get this picture. For some reason, and I can't think of why, it made me remember a story about my Mom and sister, Lori. My Mom's car was having some problems, so she pulled it into a station to have it worked on while they waited and happened to have a good view of the mechanic. Lori buried her face in a comic book, while Mom continued watching the progress on her car. Under her breath Mom said, "Wow, he must have had some very serious surgery on his back". Lori, peered around her book to see how Mom would know something like that and asked, "How do you know??" Mom replied, "Well, gee, just look at that big scar on his back". Lori asked, "What scar??" Mom looked at Lori and asked, "Do you need your eyes examined? That big dark red gash right there on his back...it looks like a recent operation to me; it's still so dark red and angry looking". Lori slammed her comic book down in her lap and said, disgusted, "MOM." Mom asked, "What?" Lori shook her head at her mother and harshly whispered, "That's not his operation, that's his butt crack!" (Lori talks like that :-p) Mom took another good look and sure enough, that's what it was. She was so embarrassed that she sat there the rest of the time trying hard not to look at the guy's "operation" and trying to surpress loud laughs, but giggling so hard that she was in tears. And thereafter whether it be a plumber, mechanic, electrician, or anybody hapless enough to squat in front of Mom or us, it's always, "Oh migosh, their operation is showing!"
Maybe it's that we've been in a medical frame of mind of late because I just learned I have to go get one of those darned colonoscopy thingys done that Cappy had taken last year. I guess they put you to sleep for it now, but I had one done and was awake!!! It was awful. Maybe that's what I was thinking about.
More IMPORTANTLY, our good friend, Sam, has been in the hospital for the last week with a BAD infection in his arm. Because we love him so much, we've also given him a pain in the butt by pestering him, and asking nosy and annoying questions, as if he didn't have enough to worry about. (Cappy and I can be like that sometimes, darn it) But the good news is, is that he got out of the hospital today! He's going to be fine and before we know it, he'll be smoking up his neighborhood again with all kinds of wonderful things in his smoker. Soooo he's out, he's freeee. No more operations, no more open gowns in the back, no more shots. (I wonder if they gave him one of those HINI shots....nope, am NOT goina ask. And his arm was all bandaged, too, because of the surgery, but we aren't gonna ask to see his operation either. We're just going to let the poor man finish recouperating in peace.)
Posted by cappy at 1/27/2010 2 comments:

The Saints Are Going To The Super Bowl!! 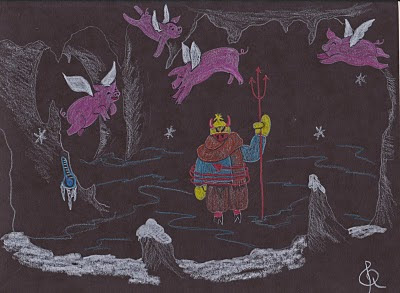 (Click on picture to enlarge)
After 43 years of trying, the New Orleans Saints finally made it to the "BIG" game. Win, lose or draw it's a great feeling and just what the area needed to lift it's spirits. To quote Jim Henderson (the "voice of the Saints") "Hell has frozen over, pigs have flown; we are going to the Super Bowl!!!!!"
I spent the morning in quiet reflection compiling a list of all the dedicated fans I know who didn't live to see it. I can't help but think that somehow they know about it anyway. "Bless you Boys".
Posted by cappy at 1/25/2010 3 comments:

Every body down in "Who Dat" country are all excidetly awaitin todays Big Game. Every one who can carry a tune is making Saints songs. Here is one of my personal favorites: http://www.youtube.com/watch?v=t4151TrYYQ8
As the day goes on I'll add more links and if you have any post them in the comments and I'll add them too. Hope yall all enjoy the Games. 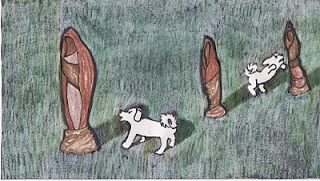 As the temperature plummets tonight, I was forced to run outside with an armload of big brown bathtowels and wrap our small young trees, to prevent them from freezing in the upcoming and continuing arctic blast that has taken over our country, including South Louisiana. Once swaddled in various shades of brown terrycloth and clothes-pinned into place, the trees took on the look of diminutive Franciscan priests standing, hooded, in the dark yard, eerily lit by the streetlight. Slightly bent over from the weight of the towels, the 'monks' silently stand their ground, prepared to face the frigid night ahead of them.
I came into the house, stamping my half-frozen feet and hoping to get a sense of feeling back ino my nose and ears. The dogs not, wanting to wander back outside into the icy cold, had been sitting by the front door waiting for me. As soon as the door swung open to let me in, they both spied the 'trespassers' in their yard and bolted outside barking madly in an attempt to alert the whole neighborhood of the invasion of the minature monks and to frighten them out of our yard. The tiny 'priests' were unfazed by the ruckus; they stood there, heads bowed, slightly bobbing in the North wind, mutely standing vigil in the icy darkness.
When the dogs finally gave up, perhaps thinking they had sufficiently intimidated their rogue adversaries, and I managed to herd them back into the house, I was able to close the door on the figid priestly "still life" spectacle in our backyard, hoping them the best as they brave the long cold night. I hope the morning light finds the valiant little friars none the worse for wear.
Posted by cappy at 1/09/2010 6 comments: