Over the years we have occasionally made our own home made sausage, and if you have read our blog you've probably seen several posts about our various attempts. Lately, as the cost of store bought sausage has gone up and the quality and quantity of the sausage has gone down, we decided to just go ahead and make our own more often.
It's a fun project for us to do together, and also, because of Peggy's celiac condition, we can have control over the ingredients we use, making sure no wheat or gluten is included that can make her very sick.
With this in mind, we went out to Cabelas and bought us a 5 lb. sausage stuffer. Then, while shopping at the "Pig", (Piggly Wiggly) just down the street a few days ago, I saw they had 80-20% ground meat for less than $2.00 per lb. ! Well, alrighty then. 5 lbs. sounded just right for our sausage stuffer's first project. 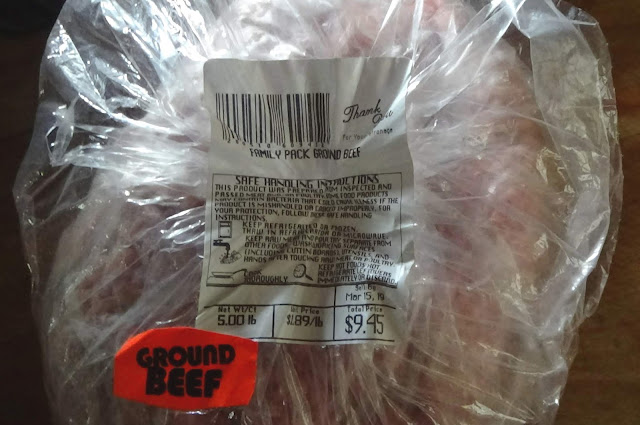 We brought it home, and I dumped it into a stainless steel bowl, 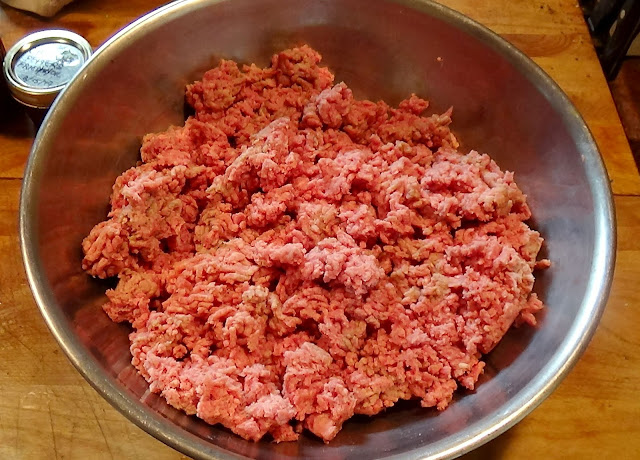 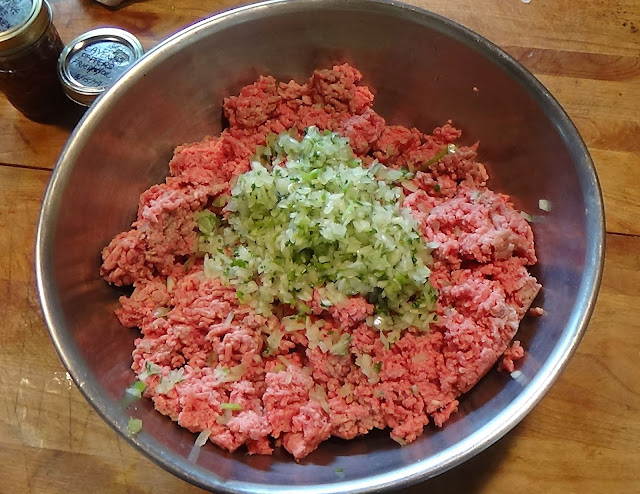 To this I added 1/4 cup of our own Cajun seasoning spice and 1 teaspoon of pink curing salt. I added a li'l over a cup of water to help the seasoning permeate through the mix evenly, plus, the moisture helps the ground meat slide down and through the stuffer easier into the pork casings.
Our dear friend, Melissa stopped by to visit and kept us company while we stuffed the sausage into natural casings. This is something her family has done for generations, so Peggy appreciated her tidbits of helpful hints, as she is still relatively new to the process, but she's trying to learn how to do it without messing up too bad, while I was at the helm feeding in the meat and operating the stuffing part of the mechanism. Peggy always says, "There's always an angel when you need one," and today it was our cutie-pie, Melissa.

We had so much fun stuffing the casings with our mix and swapping stories with Melissa that, sadly the camera, which was sitting at the ready there on the kitchen island, got forgotten.  When Melissa left, later Peggy and I noticed the camera and were disappointed that we hadn't take more pictures of the stuffing process.
So, I went out and took these two pictures of the sausage that we had made and bagged, in the freezer. 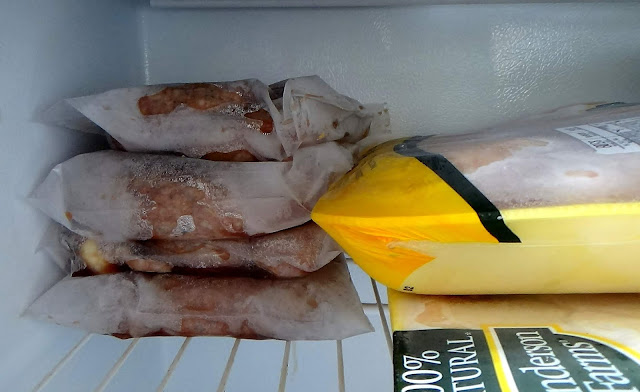 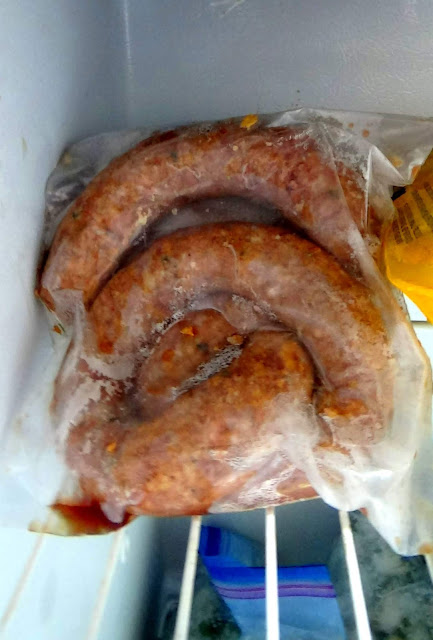 Sighhh...oh well, maybe next time.
There was a little meat left in the stuffer that didn't get into casings, so we fried it up for a sample and no picture of that, either. But, anyhow, based on the taste of that, and in the opinion of our little dawg, too, it won't be long before we are making some more sausages!!  I expect in the next few posts, our meat creations of today's post will star center stage in our pots and pans, complete with seductive photos aka 'food porn', inspiring you to give it a try.
And, we promise to have the camera filming all the details the next time we are operating the sausage stuffer, no hiding the sausage, 'cuz despite what people are saying nowadays, you DO want to see how the sausage is made...right?
Posted by cappy at 3/14/2019 2 comments: