While snooping around in cyberspace or watching food tv, lately, I've noticed folks talking about using coffee grounds in their bbq dry rubs. I normally take my coffee black and don't like anything in it...same with my beer, I want my beer to have beer in it. Well, despite this, my bein' a 'foodie' and all, it kinda got me curious.
It's really great having a friend with a smokehouse, 'cause he usually has an empty shelf when he's makin' his sausage. With that in mind, I mentioned to Sam that I was thinking about experimenting with a coffee ground rub on smoked meat. He said he was firing up his smokehouse in two days to make a batch of wild hog sausage, so it didn't take me long to hatch a plan. Two days later we were ready to start cookin'.
The dry rub was simple: equal parts coffee grounds, Cajun seasoning, and light brown sugar.  I measured it out in a mason jar and headed over to Smokin' Sam's, taking along some chicken legs and pork steaks to give the dry rub a test run. 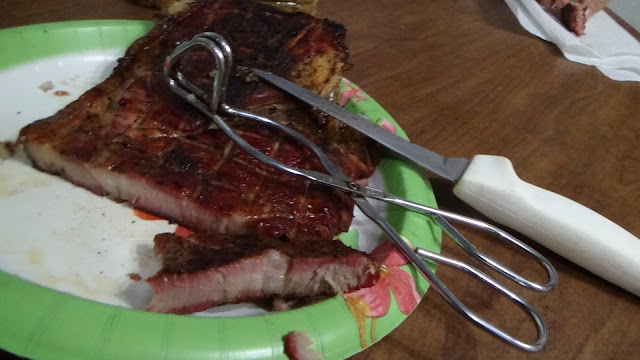 Here's what the chops looked like when they came out of the smokehouse where they had enjoyed a few smoky hours underneath Sam's 70 lbs of wild hog sausage. 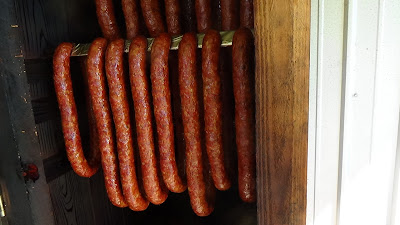 I brought Peggy some samples, plus video and photos of the day's exploits, so she made a short video.
As you can plainly see, we had a good time like we always do, along with the results of our test. Now, I still don't want any chicken in my coffee, but I will take some coffee on my chicken, and I think I just might have to have another "chop" of coffee real soon.
Posted by cappy at 9/18/2015 No comments: 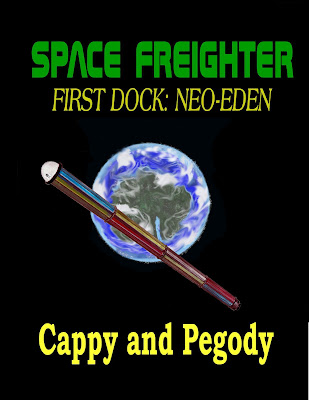 Well, now we are pretty excited. After more than a year and a half, we finally finished our book and it's on sale as an ebook. Within the first couple of minutes we sold one copy...woo hoo! There's an option to let people read 20% of the book for free, so about twenty (maybe) people are doing that right now...we hope they'll want to buy the whole thing. In a few days it should...we are HOPING... be available on Nook, Kindle, Amazon, and etc. The link is here: https://www.smashwords.com/books/view/566680
I, Peggy, am not a huge fan of science fiction, so when Cappy asked me to co-author, I had a lot of input and fun weaving a lot of stories around the main story. I loved developing the characters and their funny dialogs.
Cappy is amazing, to me. His knowledge of cutting edge science and imagination allows the reader to 'be there' in the future, living normal and exciting lives. There are no monsters, or witchcraft or aliens, but there are high adventures to be sure.
I, of course, am prejudiced, but to me, now, it's a "fun read". It's about a captain, much like 'our' Cappy, who pushed oil barges up and down the Mississippi River, and all around the bayous and back waters of South Louisiana. The barges he pushed were the size of football fields. The captain in our story, carries huge barges in the shape of octagonal freight containers from planet to planet. Pricey merchandise. Hmmm. Wouldn't a space freighter, traveling, isolated and alone out in the universe attract the attention of bad guys (pirates), looking to take advantage of the situation? Who's gonna survive?
Actually, we hope it's us! We hope it sells like gangbusters!
Well, since you've been along for so many 'rides' with us, here on our blog, we just wanted you to know where we've been and what we've been up to. Wish us well; we'll keep you updated.
Posted by cappy at 9/17/2015 No comments: