Am on the Lamb

I was all set to ride the storm out with Sonia and her family across the street. She said she's lived here in our little town all her life and they have never left for a storm. I guess Cappy knows I'm a nervous nut, or the kids up in NYS are, so he's having me go on over to stay with Aunt Gussie over in South Central Louisiana, and maybe from there if it looks like it's going to get bad, try to haul her up to Alexandria with me to stay at her brother's, Uncle Eugene and Aunt Marguerite's house.
Soooo, I'm rushing around trying to secure the yard, so that missles, like potted plants or bird baths don't go flying across the street at Sonia and Jude's house during the storm. I've got the SUV packed to the gills with stuff we'd want to keep, no matter what. Photo albums, and the like. In all the packing, I left little room for the two curly white dogs to fit. LOL...the guy who stopped by here last week from AT&T laughingly said they look like sheep. Yeah, they're little lambs alright...SparkyBear the Brat is watching my every move, packing their food, etc. and every time the car door opens, he jumps in. MarkyBear is watching with one eye as he's grown tired and is mostly napping. So, I just wanted 'yall' to know what I'm up to. Cappy insists on, once again, riding it out on his tugboat, tying up somewhere 'safe'. When they can't find a platform to tie up to, they tie up in the trees...strong trees. It's what he calls, "Chokin' a willow".
Alrighty, I'm outa here..."move over SparkyBear or I'll sit on ya...all the way to Aunt Gussie's house, ya Brat". (ON the 'lamb'...get it? well whaddaya want? I don't gots time fer poetry here.) God Bless!

O, We of Little Fay 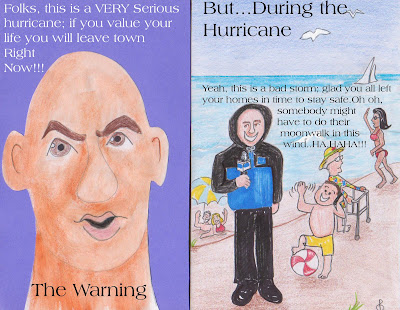 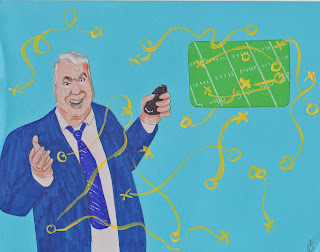 Red All About It 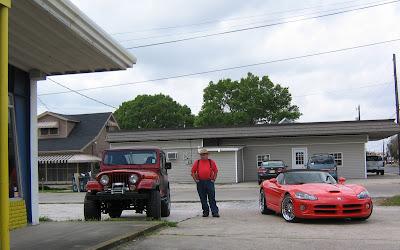 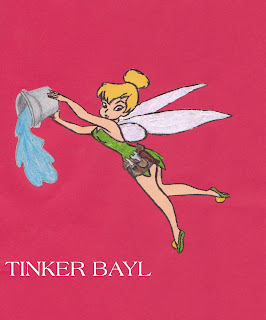 And I think Cappy's right; God does have a good sense of humor. 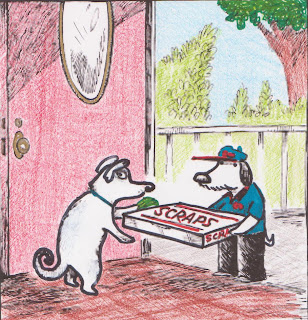 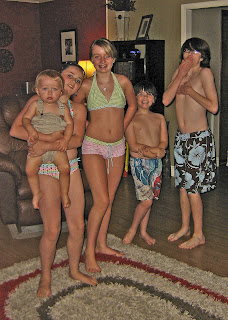 Well, they dressed in style and we went hog wild, me oh my oh; son of a gun, we had big fun on da 'bayou'. What a wonderful two weeks! Cappy was home, we rushed around getting ready for the family reunion aka Jambalaya, then friends and family began showing up to help, then we party'd!!!
Grandson, "RJ" arrived Thursday night at the airport, then the next night, son, Dan, with fambly in tow arrived. (I had to laugh, because I had been talking with son, Joe, who said, "Gee, everytime I try getting ahold of Dan, I can't; he doesn't answer his phone, then when I go look at the Blog, I see his face on there". All I can say, Joe, is, "Brought yerself on down here". We'll spoil you rotten.) As Cappy said in the last post, I, (Peggy) had been taking photos all along, but as soon as Dan and Jennifer & the kids got here, all bets were off, so we don't even have pictures of them being here for the Seafood Courtboullion, but they were here. The next day, (Saturday) although I didn't take my video camera, (for I still have so much to learn about editing, etc. with the danged thing) I did take plenty-plenty pictures of the 'peeps' at the Jambalaya.
The family reunion was a lot of fun, as usual, but we missed those who couldn't make it this year. We are grateful for Cappy's sister, Maria and her husband Darryl for being such gracious hosts for opening their hearts and home to us. We are one rowdy bunch, to be sure.
One thing that made it extra special was that there was a young man in attendance, who is a cultural exchange visitor from France. He took quite an interest as to how the jambalaya was prepared. Seeing his face as he tasted it for the first time was priceless.
As usual, the gathering started out at a fast pace, because that's how things flowed, then after the meal, people slowed down, and got more mellow to let their tummies digest. It was just one wonderful day, all the way around.

And to son, Joe, yes, that's where Dan has been again. Son of a gun! 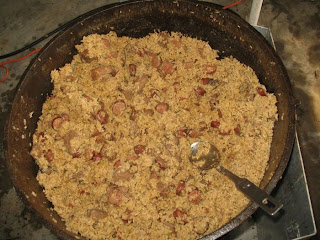 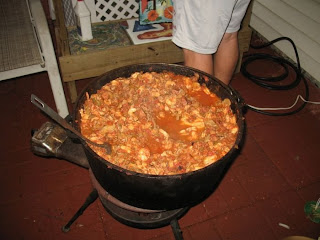 Our family reunion weekend always starts on Friday. Family, who travel aways to get here, often drive in on Friday afternoon, so as not to miss any o' da doings on Saturday. Peggy and I spend Friday doing all the prep work for the Jambalaya and cook a big pot full of seafood courtboullion (coo-bee-yaw`) for the family, as they start drifting in, in the evening. This year, a friend Stephen R. 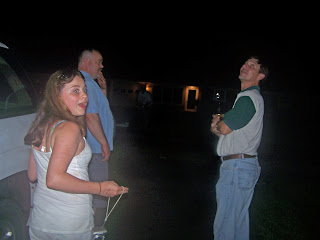 came over and was a great help chopping, deboning marinating, drinkin', jammin', and visiting, as we prepared the 30lb. of pork 15lb. of both, sausage and onion, for the jambalaya. While doing that, we also smoked 6 slabs of pork ribs on da bbq for the non seafoodies. While Steve and I did that, Peggy and her friend Lona L. sat inside visiting, while fixin Peggy's coleslaw, and her amazing BBQ sauce. I gotta tell yall her sauce does my Ribs proud. I hadda smile when I noticed one of the neighborhood kids with a bowl of rice with Peggy's BBQ sauce on it. He was using the sauce for gravy. Think about it, the kid had all that seafood, slaw, bbq, amazing bread pudding, etc. he coulda ate 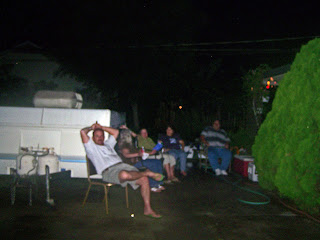 but he CHOSE Peggy's sauce over rice. That just shows ya how good this stuff is. We got started choppin' at 12:30 pm and had a good crowd by 5:00 pm,then ate and visited till after dark, at which time we topped it off with a big back yard fireworks show for da kids. It took us forever, but we finally got a slide show put together. I must tell ya though, that Peggy was in charge of pictures and did a great job.... that is until grandson Chase showed up. Then the camera forgotten it was maw-maw time. Hope yall enjoy the slide show here's da link: