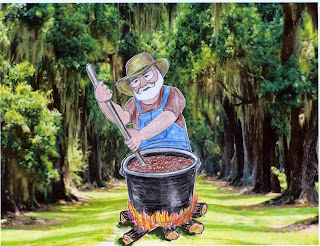 Ok, let's begin at the beginning: 9 outa 10 homes around here have a black-iron pot on their stoves full time.  They stand there black and shiny, proudly part of what Peg calls "Kitchen Jewelry", along with cabinet knobs, drawer pulls, and ceramic cookie jars, part of what gives a Cajun kitchen it's homey appeal. Most of these beloved cast-iron pots are well over 100 years old and many haven't EVER been "re-seasoned".
Black-iron is the original non-stick surface. Since it is black and heavy, it is incredibly efficient at transferring heat.  With this in mind, it should never be used on "HI"...the knob for temp regulation; TURN IT DOWN!!
If a black-iron pot sticks, it's because of a few possible reasons, all human error.
1. Cooking on too high a heat.
2. Not enough liquid in the pot
3. Not watched or stirred often enough, or some combination of the above.
When something sticks, all is not lost.  Add water, stir gently and keep cooking at a simmer. If ya caught it soon enough, what is stuck aint burnt, just browned and will add to the flavor of what ya cooking.
If ya shamelessly get distracted by kids or phones, and stick ya pot so bad that 'browned' goes to 'blackened', it still aint all lost. Keep cooking and try NOT to scratch the burnt bits loose and deal wit them later. This is most definitely YOUR fault, so deal with it. :-P
So, if all else fails and ya left with a pot with stuck stuff, all is still not lost.
Clean it. Never use dish soap on black iron; it was invented long before dish soap and ya don't wanna use it 'cause it is designed to remove oil from pots, and oil is what makes black iron work.
Water and a dishrag should do the trick, and if all else fails, ya can scrub with a plastic scrubby or put the pot back on the stove with a lil water and deglaze it, as mentioned.
Remember, all still aint lost; if the worst occurs and ya end up with rust spots on the inside or the bottom of your pot YOU have seriously "F-'ed up", but it still aint over!
Do not re-season the pot, cause every time ya do, it weakens the iron and eventually will cause it to crack.
Instead, wipe the rust off, dry the pot and fry bacon in it for breakfast or chicken or something for dinner. Remember, the whole pot aint ruined by just a few spots on the inside bottom. A couple cookings later ya won't even notice ya blunder.
Okay, here's a story: when I got on the boat last week, I took the boat's black-iron pot outa the cabinet, where it had been stuck by an inexperienced deck-hand. It had been "rode hard and put up wet". When I lifted the lid, the inside bottom was rusty...all the seasoning was gone. Instead of panicking, and after I finished cussing like a sailor, (which I am) I wiped it out with several damp paper towels, put it on the stove on "LOW" and dried it.  Then I poured in a couple drops of oil and rubbed them around the bottom of the pot. Later, I put in an inch or two of oil and fried the chicken I was planning on stewing that day. It came out wonderful, the crew ate the whole batch, including the gravy I made in the pot outa the pot liquor and the fried bits that fell off the chicken while it was cooking. (Peggy says she remembers Colonel Sanders calling that "cracklin' gravy") To make that, I poured off most of the oil, added water and brought it to a simmer, then added my seasonings and milk. It made a luscious gravy for the mashed taters and green beans that went with it.
When cleaning up, I washed the pot out with warm water and a rag, dried it on a low stove, "re-0iled" it and put it back on it's place of honor on the stove.
After frying bacon and sausage breakfast patties in it the next morning, washing and drying and "re-oiling" it back to normal, ya would never know it was so horribly mistreated.  Today, even though unused for lunch, it sits proud, all black and shiny on the stove, ready to serve again, as does it's brethren scattered all across Cajun country. 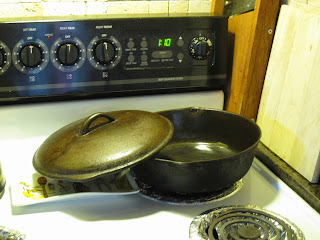 Peggy says, "if you want to know how to insult a Cajun, disrespect his pots".