When Turnips Turn Up

I took this pack of country-style pork ribs out of the freezer the other afternoon, but I had no idea what I was gonna do with them. 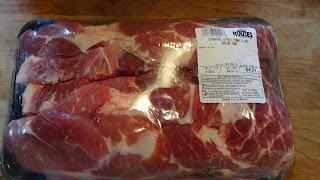 They are a wonderful versatile cut of pork from the Boston Butt Roast that our local grocer had on sale when we bought them. So then, what to do with ém? Ya not gonna b'lieve this: like a sign from heaven, when we opened our front door the next morning, there sat a bag of turnips, left by one of our neighbors. 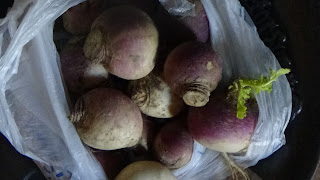 I immediately thought of good ol'-fashion pork and turnip stew, that's been a long-time-favorite of my family. With that in mind, I whacked the ribs into stew pieces. I seasoned the meat with our own blend of Cajun seasoning and some Worcestershire sauce, then let them sit and think about it while Peggy peeled the turnips. 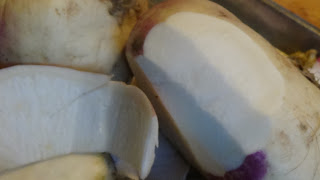 If you look closely, you can see the layer of turnip under the skin that needs to be taken off too. 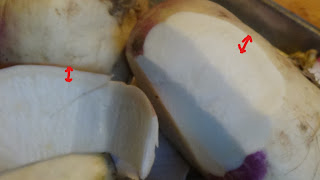 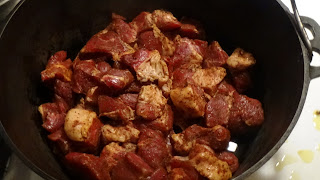 So then, the seasoned pork went into a big black iron pot with a splash of water to get it started and covered over a med-low heat. As it cooked, I occasionally gave it a good stirring 'til it looked like this: (half cooked) 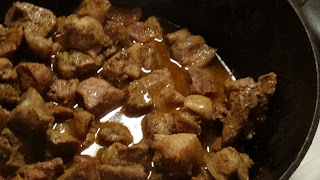 When making jambalaya, the pork is cooked uncovered, but when making stews or gravies its better to cook it covered to retain the natural juices.
So then, I took this half-cooked meat out of the pot and set it aside, then added a big ol' chopped onion and a bit of smoked sausage that I had sittin' around in the fridge, so I kind of diced it up and stuck it in the pot with the onions and the nice sauce that the pork and spices had made. 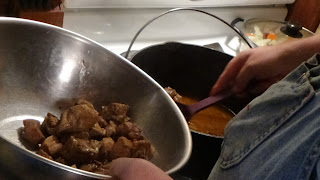 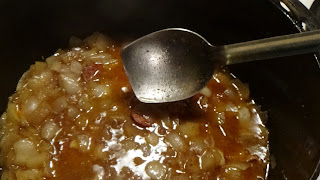 While I was doing this, Peg was dicing the turnips. 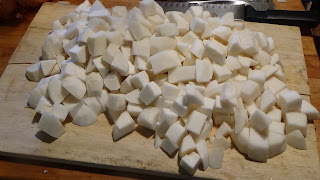 Once the onions were cooking along nicely, I added the turnipsto the pot with, a bit more seasoning, just cuz it looked like it could use a little more spice. 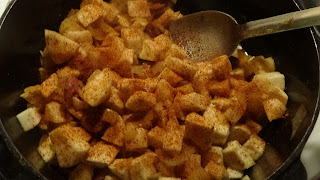 I let this all cooked down a little more then invited the pork back in, 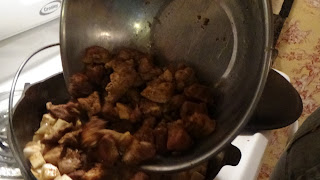 covered the pot and allowed to simmer (put the burner on simmer) for over an hour. The turnips cooked down, the pork got soft and I was able to removed as much of the grease as I could.
Peggy is a celiac, as most of you know, which means she is wheat and gluten intolerant, so we often thicken stews like this with 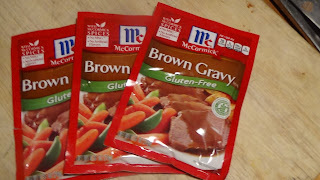 McCormick's gluten free brown gravy mix. It has a great taste and makes a good gravy.

3 packages and some cornstarch 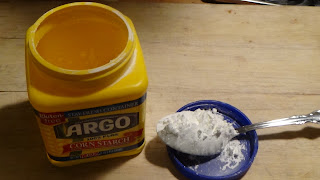 get mixed together to make a kind of "slurry" and poured into the pot. 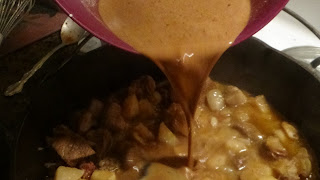 When it comes to a nice gentle boil it is done. It's so thick, rich and so creamy, it doesn't need rice. It stands on it's own as one of our favorite stews. 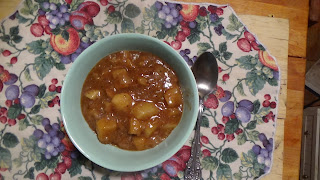 So, I guess you could say (if you had a mind to) that we turned up the turnips that turned, up a notch or two, with a sweet little piggy. Stew-w-w-eeeee!!
Posted by cappy at 4/05/2018 No comments: