We been running errands all day, but while we were at it I had 10 lb. of chicken hind quarters sitting in Cajun spices, "woo" sauce, lemon juice, and a beer.  Planning on taking advantage of the last day of late sunshine, and putting them on the grill.

With Alley-gater, and Pourky the "Q" mascots looking on, I fired up da chimney.

With natural chunk hard wood charcoal by the air intake on the left and an aluminum pan on the other side, I put the chicken and the required Cajun sausage over the pan of water, opened a beer and got the Blues on the outdoor speakers.

The stuff the chicken was soaking in went into a small pot and with half a stick of butter, and was brought to a simmer on the stove.  It will be used as a mop later, but ya need to simmer it 'cause of the chicken blood it may contain.  Ya can't be too careful.  It's been down for 30 minutes and from my hand on the pit, feels around 180 degrees.  Country boy thermometer when ya can lay ya hand down for a sec. or so 'fore ya gotta snatch it off da pit, is 180-200 degrees.

Naturally, at the 1.5 hour we couldn't stand it no more and took the Cajun sausage in, sliced it up and are nibbling on it as we dance on da carport jamming to da Blues.


After 2 hours we mopped them, flipped them,

and mopped for the last time.  Got another beer and are enjoying the end of a beautiful day.

Well, da sausage was "slap yo mama good", and da chicken is getting right. Won't be long now; it's been like, 8 beers, so it aughta be getting close.

Alrighty, afta 3 hours we grabbed a leg bone and twisted, and it came apart in our hand.  So we called it "did'.  Cookin' temperature?  Not sure; if it woulda been more than 220, the water in the pan under the chicken woulda boiled and let me know.  If it hadda been less than 180, I coulda held my hand on the lid for more than a second.  Internal temperature??  Who cares.  Twist a leg bone and ya can tell if it's done or  not.  Now we got chicken to last the weekend, and share with the neighbors.  Only problem is....I am outa Beer.

Peggy and I picked up a couple turkeys and made what us Cajuns call "cheese" out of them.  We enjoy making it and at a li'l less than $2. a lb. Not only is it delicious, but very economical.  They sell it in stores around here for over $6 a lb.  We like the fact that when we make it ourselves, we control the ingredients.  Nowadays, the stuff ya buy is full of chemicals; ya cant pronounce the fillers.  We know ours is healthy and delicious.  Here's how we do it: 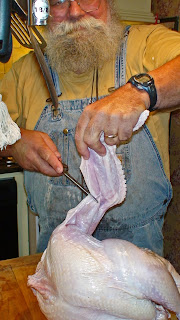 We cut the turkey up like ya cut a chicken. 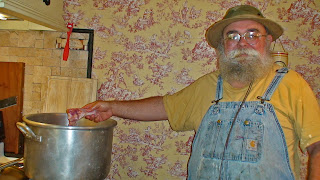 For this batch we used my Dad's old pot known as Gumbo Jr. 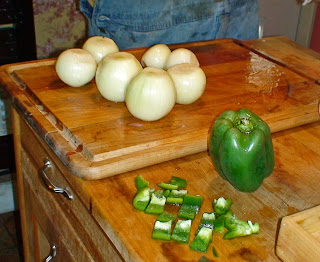 We added onions and bell pepper, 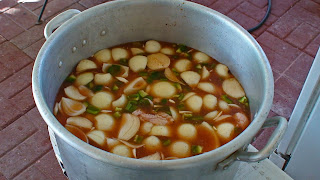 then came Cajun seasoning, "Woo" sauce, hot sauce, and liquid crab boil, then we covered the stuff with water. 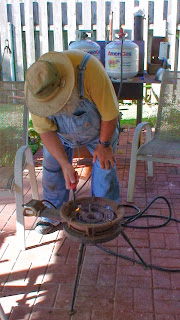 Fired up the burner out on the patio. 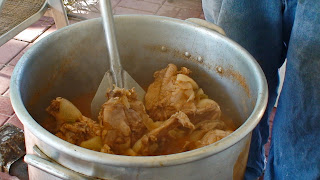 Then let it boil for right at 2 hours at a gentle boil.

Once that was done we took the meat out of the pot and put it in a couple dishpans to cool. 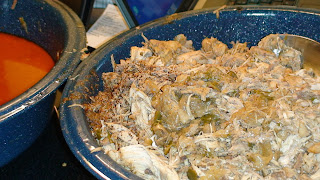 After the meat cooled we took it off the bone and strained the broth through a colander to make sure we got out all the little bones.  I should mention we did not boil the livers 'cause they are too strong flavored.  We saved the giblets for future stuffings or rice dressings.
Once it was all ground up we added the broth back, slowly bringing it to a pudding-like consistency 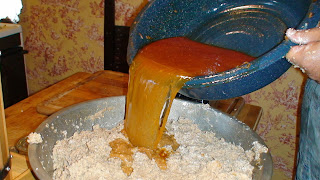 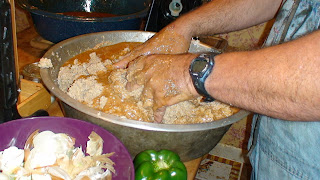 We weighed the finished cheese. 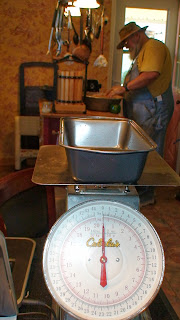 When it was done, we ended up with 7 loaf pans of this delicious Cajun delicacy.  It needs to sit in the fridge so it "sets".  It freezes well, makes good sandwiches, is good cubed as Hor D'Oeuvres on game day, on a cracker or straight up. It's nice to know what ya eating and its satisfying to know ya made it.  Here is the recipe we used, but feel free to adapt it and make it your own. 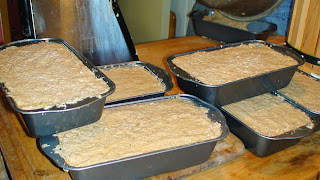