We always celebrate The eve of our anniversary eve.  It is a very special day.  It's Peggy's mother's birthday and my boyhood best friend David's birthday.  Since it's 2 days from our anniversary, we figure it's a great excuse to kick off the party.  Peggy loves good fried chicken, but sadly, due to her celiac disease she can't just pop in to the local chicken joint for it.  So, good southern fried chicken, for us, is a special treat.  Sure, I occasionally buy some for me, and share it with my dawg, but always feel guilty, us eating it in front of Peggy.
This time I fried the chicken like my daddy usta do it, in corn flour aka Fish Fry. At the family camp we only used Fish Fry flour to fry chicken in our big black iron pot.
So, I fried Peggy up a batch, and as a surprise, I fried her some kosher dill pickle spears to go along with it. I really hate to admit that this is a "yankee" trick I learned at an upstate New York Blues bar. The bar claimed to cook Cajun food so naturally, I opted for a burger.  (If I want Cajun food, I'll cook it myself and not have some yankee try their hand at it.)  I must admit though, the burger came with fries and a fried pickle spear, and they were "prit dang good".  I bit into the deep-fried pickle spear thinking it was a potato log, like we have down here in South Louisiana, but was pleasantly surprised to find a kosher dill taste in that crunch.  I've always made them from pickle slices, but I've gotta say, it was a trick I didn't mind stealing from that danged yankee bar.
You oughta give it a try; I think you'll love 'em, too. 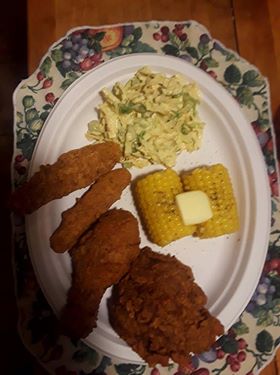 Couple this , couple that , some of those and the other and a few too many beers.  Truly an epic eve for our anniversary eve.  Happy birthday Peggy's Mother in heaven.  Hope ya had a great day ol' friend of mine.  Not a bad day and who knows what tomorrow will bring.
Hi, Peggy here! One thing I'm hoping tomorrow will bring is getting my beloved old computer fixed. With all the issues the house has been going through during this last five or so months, my video and photo editing capabilities have been kaput due to the computer suffering some kind of malady that may or may not have been brought on by whatever the house was suffering...with, or, well, who "nose" what. Sooo...whatcha see here, in the photo Cappy insists on posting, is a fine example of what I cannot do to make the wonderful meal Cappy cooked, look as delicious as it really was.  And believe me, delicious it was!
Cappy and my Mom (May God rest her sweet soul) had a lot in common when it comes to cooking projects. She'd get this almost electric excitement before and during. Cappy is the same way. I just thought we were going to simply fry some chicken. He said, "Nooo...this is going to be an adventure, like my family used to do at the camp out on the bayou."
He hauled out the big ol' 50 lb. black iron pot...well, mebbe it's not that heavy, but I, myself, can hardly lift the thing. I was going to use the small black iron frying pan and use maybe an inch or so of oil. I think Cappy used about a quart or more. He had me take the chicken out of the fridge where it had been marinating overnight...more like hiding out, I'm thinking. He ordered a sundry number of bowls and plates and pans, one to be double lined with brown wrapping paper, plus an assortment of tongs, forks, an onion to be cut into 'sticks', and I don't know what all. More bowls were called in, as I hadn't gotten out enough in the first place. I just couldn't imagine what was about to take place, so I busied myself making coleslaw and whatever else I could think of to stay out of his way. Well, that didn't work. The first thing I knew, corn flour was flying everywhere, I was elbow deep in raw chicken, cornstarch, egg-wash and highly spiced corn flour, while Cappy merrily tended to his pot. When his onion 'sticks' were cooking away just right in the ton of hot oil, letting him know the temp was perfect, he began gingerly laying the chicken pieces (which by now looked like fat dough boys) into his caldron, only three at a time, lest one more piece make the oil cool down.
He had music blaring on the stereo, having a ball. Once or twice we ended up dancing with our chubby heavily flour dusted bellies bouncing to the beat of some old Johnny Cash song. We had fun.
We finally ate around nine...at night! Cappy apologized for the mess in the kitchen. I told him it was worth it and that I'd have it cleaned up in no time. Twenty minutes later, all of his accoutrement was in the dishwasher and the leftovers in the fridge.
Stowing it all away, I had to laugh to myself because Cappy is always telling me that I always make a mess when I cook. He sez, "It takes two knives, one spoon, three pans and a cutting board just for you to boil water." That's a good one, Cappy, but alas...I think my Mom used to say the same thing, (God rest her sweet soul.)
Posted by cappy at 6/27/2018 No comments: