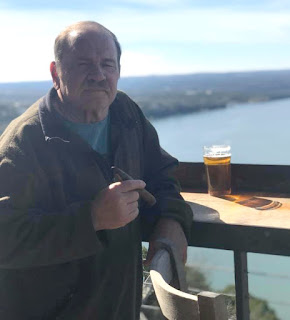 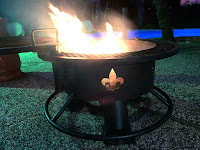 Several months ago my cousin, Mark and I sat out on his patio visiting and sipping while he puffed on one his stogies.  It was after the crowd had cleared and everyone else was asleep.  That magic time when dear friends can talk and share and reminisce about almost everything and nothing at all.  We talked on into the night and caught up on the last few years of yet unheard stories.  Somewhere during our visit Mark up and spouted some golf course trivia.  When ya consider that his yard is in a golf course community and he plays the game every chance he gets, this should not surprise anyone. He asked me, "You know why a golf course is 18 holes long?"  I decided to go ahead and play straight man and answered, "No Mark, I aint got a clue; why is a golf game 18 holes long," to which he replied with a story.

"Ya see, the game of golf is from the Scots, as is fine whiskey and their love for it.  Those ol' guys played golf in fields and celebrated every completed hole with a sip of whiskey from their flasks. Since Scottish drinking flasks hold 18 sips, when they ran out of whiskey, they quit... and it turned out to be 18 holes for 18 sips."
"Hmmmm," I said, "that's interesting" and forgot about it for a week or so.
Back here at home, sitting at my laptop, drinking coffee I recalled Mark's whiskey trivia and figured it might be fun to investigate the theory; give it good "scientific looking into", so I went to "Googling".
First, I had to find out how much a "sip" is.  After poring over several documents, taking notes and such, I learned a 'sip' is roughly half an ounce, a 'swallow' is a full ounce, and a 'gulp' is 2 whole ounces.  Some claimed there were 2.5 sips to a "shot"-- a "shot" being an ounce, so I figured the next logical  step was "experimentation". (Said he, with a warm smile.) 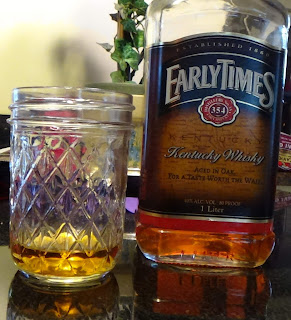 This is one 'shot' (ounce of whiskey). After trying it a few times, I discovered that, for me, there was a li'l left over after 2 sips. I musta took bigger sips than the average Scottish sipper. Ya think? 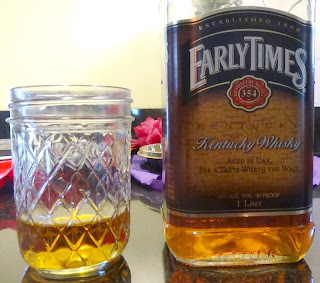 This is 2 ounces of whiskey, and after several more tries at practicing my 'sipping', I came out with 4, 5, or 6 sips. ...anyways, after several more tries at sipping my way through this experiment, I got an average of around 5, so I decided the last pour was indeed a gulp. So now, then...where did that leave me? And where was I?
A few days later, my mind went back to thoughts of my whiskey experiment, so I started investigating drinking flask capacities, and it seems that a man's drinking flask is 8 ounces and a ladies is 6 oz.  Don't get mad at me, gals, I didn't make up these facts, I'm just reporting them.
So, I kinda forgot about my project for a while, until I found myself standing in a liquor store in West Virginia. My future son-in-law, David and I were checking out, when I noticed all the small bottles behind the counter, so asked the gal for a half pint of the whiskey.  I figured what with New Years a couple days away, it would be a good time to continue my flask research.

Soooo...I filled it up again and as we sat outside bbqing and such, we counted again and dang it 14 again! 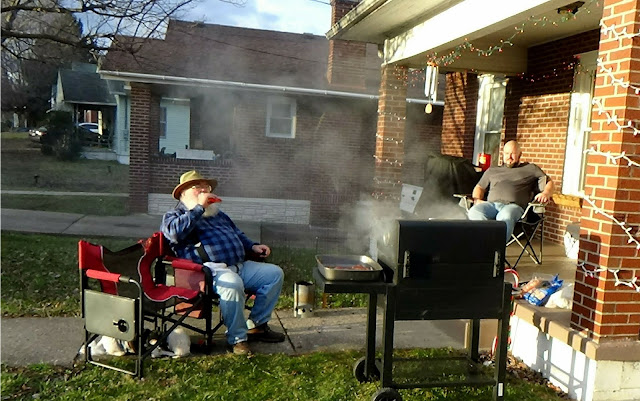 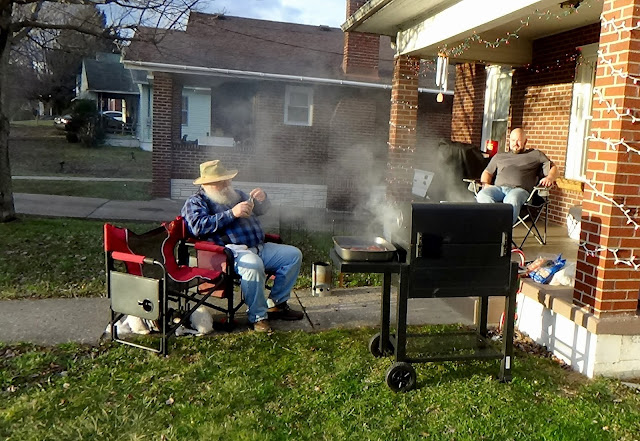 Count and sip, count and sip... both times it came to 14.  As the day turned into night, we sat visiting and sipping I filled it up again... but for shome reashon, I losht count....
A week or so later, when we got back home here to South Louisiana, the darned whiskey experiment and failure stilled kinda bugged me. Then!!! Then, somehow, I noticed that, like many things these days, the half pint of whiskey had been down-sized!  Much like the 14 oz. "pound" of bacon, (a pound=lb. is supposed to be 16 oz.) the half pint of whiskey I had purchased was only 6 oz! and not the usual 8 oz. sooo... the plot thickened!

A few days later, Peggy and I were at Walmart and as we were checking out, I spied a shiny flask sitting by itself, out of place, where someone had "chucked" it, in amongst the potato chips and candy bars...impulse items. It was 8 ounce flask!  Well-l-l-l, I snatched it right up and brought it home, where I filled it up with the whiskey my Dad dad used to drink and there it sits ready for the experiment to begin afresh with honest measures this time. 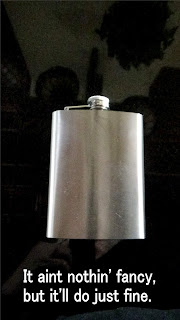 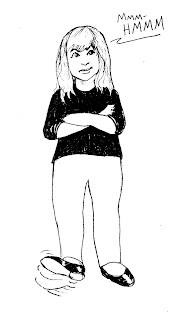