A Pair Of Doves Come Home To Roost

We were thrilled to see a pair of Doves (Peg calls them 'morning doves') build a nest on our patio.  There are a lot of them in our neighborhood. We've always enjoyed hearing them 'coo' and seeing them here and there, and occasionally visiting our yard. We have often seen them perched on the high lines, in pairs.  We were surprised, and frankly, quite honored to see them building a nest in our patio. They are not bothered  by our noisy comings and goings and even sat through one of our smokey BBQ's.
Our kittens have all flown the coop, so to speak, hopefully to nice homes in the neighborhood. They just, one by one, 'up' and disappeared. Heartbreaking, but it's the life of yard cats in our town. If cats do have nine lives, they are living it up somewhere else; we just hope they are happy. Their "Mama" disappeared along with them for about five days, then came back injured, so now, she's a house cat. ($ getting her and her kids "fixed", and now more $ getting her repaired...surgery...yow! The look on our wallet's face? Priceless.) She's had a rough life and she's a serene, sweet good girl, so...we shrug and say, "Whatcha gonna do?"
It's with this thought in mind, the doves, who apparently trust us, might have a nice life on our patio. A few weeks ago, with Mama and her brood lurking about and bringing us birds, frogs and mice, we're pretty sure these doves wouldn't have had a chance of survival.
It's the ebb and flow of life in our yard. Not that long ago, we could say our yard was "wholly cats", then our garden got "squashed", now things have "dovetailed" into another dimension that we will enjoy, until this adventure evolves into who knows what. Leastwise, to us, it's always interesting.
We just got a new video camera, so, in an effort to get used to it, we thought we'd make you this little video:

It all started innocently enough last February with Peg des- cribing to me what she planned to be her "shade garden".  She wanted a long, kinda narrow bed that would run from our yum-yum tree out into the yard. She envisioned a 'hedgey', 'ferny',  free-growing mass of subtropical plants, with tall shrubs and maybe a dense shade tree in the middle, and the whole thing would act as a border for the "courtyard" area that we are slowly, slowly, year by year putting together. Peg's the one calling it a courtyard; I'm callin' it our fire-pit area.
I hustled up some cinderblocks from a neighbor, and roughly lined them up, outlining where she wanted her beloved shade garden to grow.  After hauling a few wheelbarrows of soil from our compost/worm bed, I spread the dark rich compost loam and filled the cinderblock rectangle I had created, then to help keep weeds out of it 'til she'd get around to planting what she wanted in there, we covered it with dead, dried out banana fronds.  As an afterthought, I stuck a gift Rosemary in the corner and planted a dwarf olive tree in the middle that had been living unhappily in a pot for over a year.  I had recently pruned our crape myrtle, so I also stuck in a few branches that Peg dipped in rooting hormone, thinking they might root.  (they never did.) 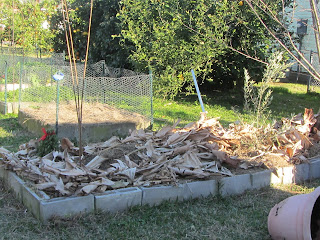 Since my gardening assistant, BeauxBear seemed to approve, we agreed it was a good start, so now Peg could go ahead with whatever larger plans she had to put in it. 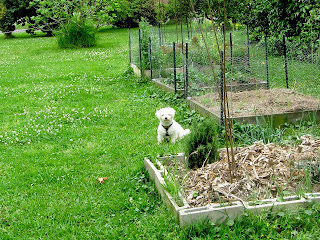 Some time later I pointed out to her that there was small patch of mysterious "green" growing in there that I knew neither of us had planted and asked her if she wanted me to pull it all out, but she said, "No, it's some kind of volunteer, and I'm just nosy enough to let it grow to see what it is." 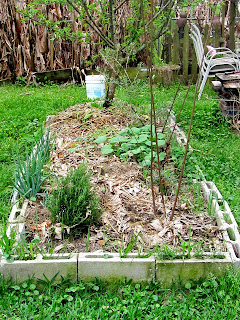 The leaves looked like maybe squash or melon or cucumbers, so we just left them there. We stuck in a line of onions along the way, as well, for good measure. 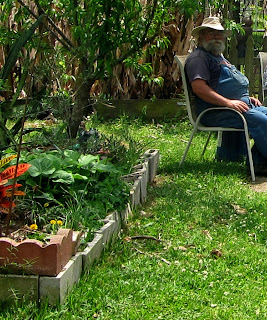 We kind of turned our back on 'em for awhile, while we took care of the main gardens.  As Spring sprang, the shade garden began to look kinda "gardenish".  Peggy continued sticking ferns and seeds and stuff in it and the "volunteer" continued growing. 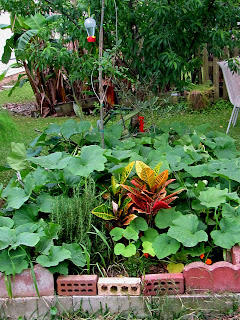 It escaped over the brick garden wall and took off across the yard! 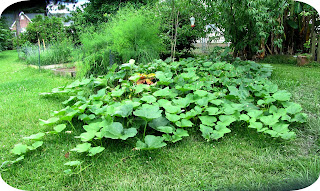 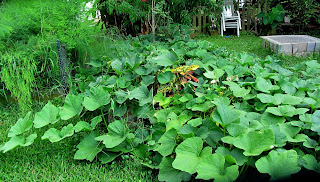 This made mowing very difficult and right when I got aggravated enough to pull the whole mess up anyhow while Peg was out shopping, I noticed something. 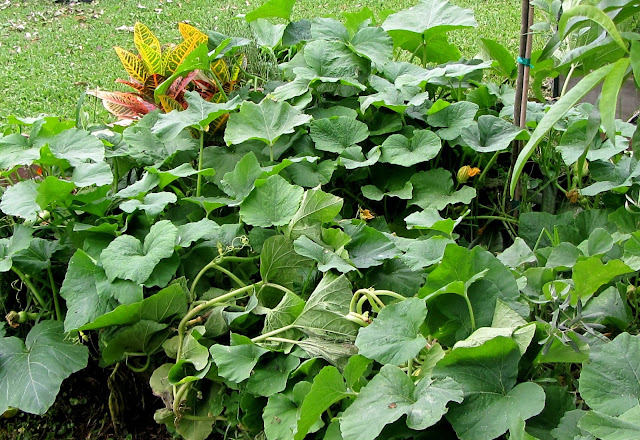 If you look close, you can see little green butternut squashes growing amongst the big shady leaves here and there.  Well ,in that case, to heck with it, I figured...let 'em grow! 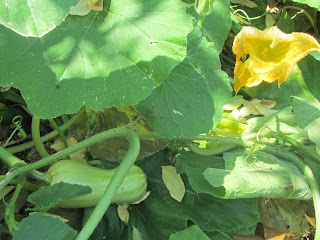 Grow they did!  Getting big and beginning to ripen. 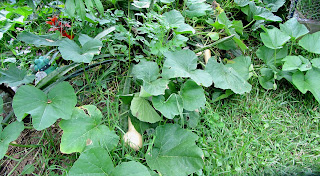 By then we knew they were butternut volunteers, for sure that had once been tossed away, fit for nothin' but the ol' compost pile.  I began to watch them and check them and anticipate several wonderful dishes we could make with them. 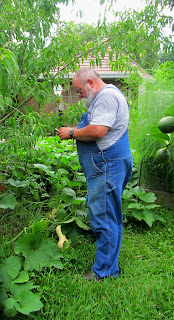 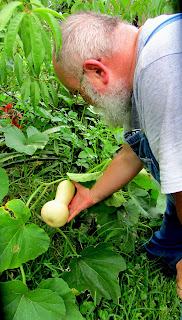 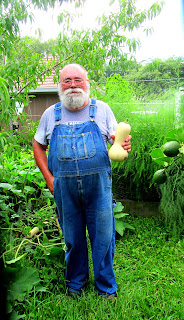 It wasn't long before I was able to bring in a mess of them. 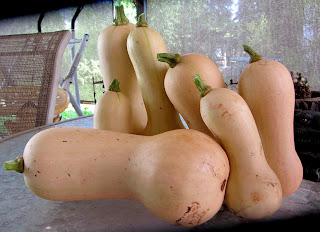 Well, as often happens plans go awry, and we wind up doing something else. 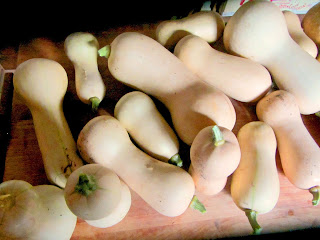 Peggy's nice shade garden is on hold for the Summer on accounta once more our plans got squashed...but that's a good thing.
Posted by cappy at 6/11/2015 No comments: