Friday the 13th, of November 2015, just a couple of weeks ago, was not a good day.  I lost a very good friend, that day.
I don't rightly know how I came to know Todd Rodrigue; we are not kin to one another, we didn't go to school together, nor are we neighbors.  We met here in town amongst a group of good ol' boys who love to get together over a pot, or smokehouse, or stove, or fire in general to pool their talents and hone their bragging rights afresh about their own techniques and ways of cooking up some real honest-to-goodness Cajun foodstuffs to go along with a few of their own assorted beverages, jokes and stories. Over the years, Todd and I became good friends. (tall fella standing next to me) Many's the time he'd just stop by and we'd spend time comparing notes on...well, life in general. I cherish those times, knowing what a busy man he was, had so many friends and things to do, yet he'd find time to come and just sit a spell with me. 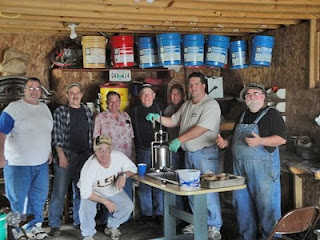 Those of you who read our blog will know him from many boudin making and outdoor cooking adventures.  The man was indeed, a true Cajun adventurer and I couldn't begin to list all the things he loved, but he deeply valued the 'old ways'; the 'traditions' and struggled to live them and pass them on.  Just a few of these things were fishing, hunting, and he trapped. He was a competition shooter, who won lots of awards.  He was an avid gardener and home brewer.  Smokehouses, bbq pits, and garden boxes filled his back yard. I like to think I was the one who inspired him to do raised bed gardening, but he far surpassed me and branched into grape and berry production for his wine making.  He supplemented his income in typical Cajun fashion with commercial fishing and crabbing, hunting, and a number of other projects, but his main income was being a night shift ICU nurse, and was awarded nurse of the year 2015.

His daughter, Taylor put it so well:


Daddy's Eulogy
Taylor Michelle Rodrigue .  Wednesday November 18, 2015
"Saint John Paul the Great said, “Doctors, nurses, and other health care workers are called to be the living image of Christ and of his Church in loving the sick and the suffering.” My daddy certainly lived up to this reputation that JPII set. Within his career as a nurse, he has touched and saved many lives, but especially within those last seven months of his life.
Daddy told me many stories of helping other cancer patients in ICU and those who were dying. My favorite is this—while tending to another cancer patient one night in ICU, the patient complained of how no matter how much education the doctors and nurses may have, none of them will ever understand what it is like to live the horrendous disease of cancer in their body. To which my daddy responded, “I’m in the same fight as you,” and then he showed the patient where his port was located at. He began using his disease as a source of comfort and trust with his patients. He took his disease and used it for the good of others. This story is the basis for two lessons that daddy taught everyone encountered—never give up, and look for the positive in a negative events in life.
Other than his career, my daddy had a lot of pride and joy in his wine and beer making, shooting competitions, cooking just about anything, hunting, and most importantly supporting Ty and me in anything we ever did. The best memory I have of my daddy’s support is when I was ranked the top swimmer for the 50-yard butterfly coming out of prelims. I was super excited because I had always hoped and tried to be the fastest swimmer. In finals, I was beat by a hand-touch. I was so upset and went straight to him because I was now in second. I felt that I had let him down because he was just as excited as I was about me being the top swimmer. My daddy surprised me and told me that he was still proud of me, no matter the outcome.
My daddy was a strong man, and I have that same strength within me. I will miss him daily and know that not a day will pass that I won’t think about him. But, his suffering is over. The battle is over, but he actually won. Heaven is the greatest reward that one can win. My daddy saved many people’s lives throughout his career, but it was God’s time to save his."

Todd was amazing family man. He got to see his daughter, Taylor, graduate valedictorian. He leaves behind a wonderful family.

We, of course attended his funeral and saw that he was wearing his work uniform, a snow white shirt adorned with several medals he had acquired, but because he was such a quiet, humble modest man, he never spoke to us about them. He had been promoted as head of the nursing department at Thibodaux Regional Hospital. We were touched to see so very many nurses show up, wearing their uniforms, white shirts with navy trousers. One of his fellow workers wrote on his facebook page after the funeral:
"As I awoke today, still with swollen eyelids and bags under my eyes, I am somewhat at peace. Your last command to us, to wear our blue and whites and to follow behind you as we proceeded to your eternal place of rest, was an honor. Your family is so amazing, as they even comforted ME in my time of sorrow."
During the procession behind the casket, the large contingency of nurses followed behind, and we noticed an EMT in his dark navy jacket uniform trying so hard to hold up, his face in a grimace of sorrow. Todd had no doubt worked with him to save patients that the EMT had brought to the hospital. Our thoughts were that, in his line of duty, this man has seen many tragic sights, but the loss of his friend, Todd, was about more than he could bear.
So...so many people loved Todd. He touched so many lives. It was a true honor and privilege to come to know this big man and to have him call me his friend. I will carry my memories of our good times together to my grave.  As I light up the bbq pit, or take a sip of homemade wine, throw a fishin' line into the water, take aim with my rifle, I will remember him. I sorely miss him already, but I know he is with our Lord and Savior now.
Our Savior liked fishermen and enjoyed wine so much that when He didn't have any handy, He made some.  Fish not biting?...Hah! Talk about a fish tale! (but at least His tales are True!) I can imagine the Lord showing Todd how fishing is done up there while savoring a glass of His blend of wine.
Men like Todd and me try to live by example. Todd was the finest example and I really look forward to seeing him again.
Posted by cappy at 11/28/2015 No comments: